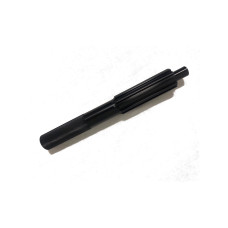 For more specific information on any of these Lenco Components and Parts please email us here, or call our tech line at (909) 673-9080.

In general, all LENCO transmissions are a planetary design. Planetary transmissions rely on a central sun gear to provide a 1:1 direct drive ratio once shifted from the launch ratio.

In order to achieve an underdrive first gear launch ratio the LENCO transmission relys on planet gears which rotate around the sun gear.

Each sun and planet gearset provides two speeds. Those two speeds are (1) the lower underdrive ratio and (2) the direct 1:1 final lock-up drive ratio.

The internal action of a LENCO is such that when the transmission is in first gear the dedicated planet gear assembly provides the launch ratio. The planet gears are driven by an encompassing ring gear.

When the transmission is shifted a clutch pack compresses the rotating sun gear assembly to the direct drive central sun gear. Thus a 1:1 ratio is achieved.

Each case in succession, with its particular underdrive ratio, determines the immediate drive ratio.

Once all cases have been shifted the entire transmission assembly is locked in the final 1:1 direct drive ratio.

It is not necessary for the driver to disengage the clutch when shifting from ratio to ratio since all shifting is done with the engines clutch fully engaged.